I know what you’re all thinking: New York isn’t over a subduction zone, or a hot spot. So why should its inhabitants worry whether the numerous mountain ranges are volcanic in nature? Well, let me tell you about another place, in another time, that thought it was impervious to volcanoes. This far-off land never gave a second — indeed, a first thought, to their beautiful mountain being a geologic time bomb. The name of this place? Pompeii.

Exhibit one is the inestimable Joppenbergh Mountain in Rosendale, New York. This mountain has already plotted against the good people of Rosendale, launching boulders and maybe other things down its rocky face. Science tells us that this is natural. You know what else science says is natural? Aliens.

Over a hundred years ago, Joppenbergh was a productive member of society, and we (people) mined it for precious ore, filling it with more holes than Swiss cheese. Then, like a hollowed-out tree, it collapsed for no reason. Now it may take its revenge against the town, by erupting. Scientists claim the mountain isn’t a volcano. But they also claim Bigfoot isn’t real. Not only is he real, but credible sources say he’s been sighted on Joppenbergh. 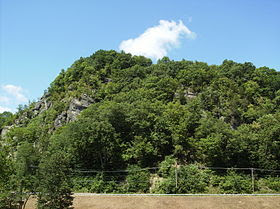 Is this an elephant-shaped cloud behind a mountain, or a plume of ashy smoke billowing from an active volcano?
Numero dos is Long Island, a colony of New York. Each year, more and more of Long Island breaks off and sinks into the ocean. Again, science beats the glacier drum (or drumlin, as it’s called), saying that this process is the inevitable result of Long Island being a moraine. Balderdash! You’d have to be a “moraine” to believe that!

Again, I say volcanoes are at work. The people of Long Island need to evacuate before the retroarc that created the ground beneath their feet opens and swallows them up, which is what credible, unspecified sources now say. I realize that a lot of Long Islanders would disavow such advice, but none of them pay their psychics as much as I pay mine. In the last year, I bought so much psychic advice that my psychic was able to take her family on a two-week vacation in Bermuda, just as she had foreseen.

There are many other prime examples of volcanic activity in New York, but I see no reason to unnecessarily burden the public with this knowledge until I can secure lucrative copyrights to, and royalties for, the distribution of my shocking conclusions. I’m also seeking grants to perform further research, which will cost the state much less than my rivals in the scientific community. I keep my budget in check by providing inaccurate data, something real scientists are too cowardly to try. I say that in this unforgiving economic monsoon, we can and should be building storm shelters without nails.

If you wish to contribute funds or cattle to Roboshub Inc., please remember to send all envelopes to a nonexistent address. We have a deal with the postal service to dispose of all “dead letter” mail, and we open each and every letter — including that invitation to Duncan’s birthday party you didn’t get when you were in fourth grade. We also collect “Letters to Santa”, which we dump into the sea because we believe it benefits children to do so.