“You can use any numbers to prove anything,” my first grade teacher told me over coffee. She gave all the first graders hot coffee every day before art. She hated the art teacher.

She also hated being woken up at three in the morning by someone in another time zone.

I can empathize with that, having recently needed to conduct several conversations with people all over the world. As an avid user of the Opera web browser (and drinker of Diet Pepsi) I immediately set out to find a widget to quickly learn the time differential between myself and my new friends (friends who are better than you because they’re NEWER).

The widget I found had more holes than the Holy See (which I assume is full of holes because of the name), so I set to work rewriting it and making it into something I wanted to use. I tried contacting the original author about my changes, but he seems to have vanished from existence over two years ago.

Behold the fruits of my labor: World+Clock!

It’s been about a week since it was approved and put up for download. I’ve taken the download numbers so far and crunched them against the average downloads for the original widget to come up with this graph (which you know is accurate because it’s a graph): 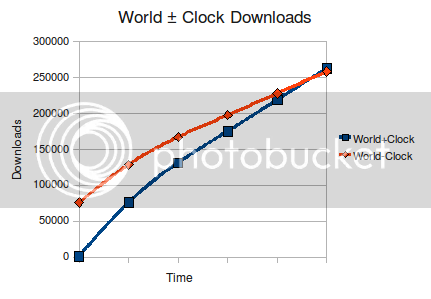 The two widgets will have equal numbers of total downloads in about six years, at the 250,000 mark — of course, it will probably happen much sooner, as the numbers of the original widget will likely plummet (due to the Diet Pepsi-like effect of a superior product) and the amount of Opera users increases.

Betting is now open on when the intersection point will occur. Remember, the house always wins and you change the outcome by participating.

Over a year ago, the Webkit project introduced a fantastic new kind of Internet technology — the ability to create color gradients via CSS. This solves an age-old deficiency in the language which confined web developers and designers to either solid colors or images.

Today, that ability had taken root in the mighty rendering engine that powers Firefox.

There are some major differences between the implementations, which this article will now explain:

Webkit includes the type of gradient as an argument of a gradient function; Gecko (Mozilla Firefox) includes this definition in the property name. Hence, to declare a radial gradient:

The Webkit implementation would probably be much more practical if there were many types of gradients. Currently, there are only linear and radial supported. One could argue that because the rest of the syntax is identical for both linear and radials, the type is interchangeable and two separate properties are unneeded for what is essentially the same function.

That argument will certainly come up when this feature is standardized.

EDIT: I forgot that radials require an additional radii argument. The two functions then have different parameters, and are NOT essentially the same.

This one’s a doozy. By default, Gecko treats gradients just like it would any other background image, and repeats them. This turns radials into spirals and linears into pinstripes. Webkit will not repeat gradients at all:

I generated these images using a modified version of a Webkit test case. You can force Gecko to render gradients in the same way as Webkit by declaring the background as non-repeating:

Let’s hope the standards catch up.