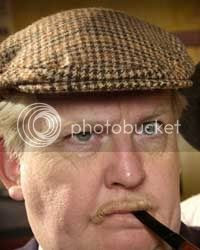 This is only a simulation of my new hat.
Ah, I see you’re admiring my new hat. Yes, it’s quite a fine hat. Where did I get it, you ask?

It was naught but a week ago. Scotland Yard had just dredged another body up from the bog; fifth one this month. A brash young detective (who’d witnessed me solving a string of murders in Zaragoza the year prior) recommended I be brought in.

So they flew me out, first class. Of course, I sneaked into coach, and insisted on providing my own transportation to the station — fresh surroundings keep the reflexes sharp.

By the time I arrived, it was nearly nightfall. A typical winter night: starless and frigid, stray cats chased each other into alleys in search of refuge.

After the formal introductions, I asked to see whatever effects the newest body may have had. Only the stomach contents were available, as all forms of identification — save the teeth — were gone.

Pretty disgusting stuff… but what was this? There was a piece of familiar-looking fabric in one of the Petri dishes. The minute I saw it I instantly remembered a similar pattern on a shirt left in the back seat of the cab I rode there in — a shirt which, if memory serves, was missing a sleeve.

It took less than 20 minutes to track the cab down, and the owner let us conduct a thorough search without complaint. We found the shirt.

Not only was it the same pattern and material, there was dried blood on it! We ran the DNA against all the criminals in the UK — and found a match. Toby “Legs” Blatherman, a gargantuan deviant with a violent past.

I surmised his shirt had ripped and gotten caught on the victim during the act. He’d then discarded the shirt shortly after discarding the body. So casual. So heartless.

When we raided his home I almost threw up; he was there, pantless, building a toy-sized log cabin out of human fingers. He may have been semi-famous due to his Redwood-like legs, but not even the tallest stilts could save him from the gallows.

It was a red letter day at headquarters, and I received yet another commendation from the Queen. They offered me a permanent posting, a hefty salary and even a lordship.

But I turned it all down. My only prize, I told them, would be an authentic British flat cap. Unfortunately, the national flat cap supply was completely depleted in preparation for St. Patrick’s Day.

The head lieutenant felt rather guilty about the whole affair, so he quietly bribed the undertaker. They walked me down to the labyrinthine catacombs beneath Scotland Yard, to the stone-cold body of Toby “Legs” Blatherman.

I claimed his spiffy flat cap as my own, and a priest blessed it to expunge any residual evil.

With a tearful farewell, I thanked my new friends for the adventure and they in turn thanked me. I returned stateside, proud of myself and at peace with the world.

But if anyone asks you, I bought this hat at Walmart. Can’t be signing autographs all the time.

New York State has been hard at work on the Year 2000 (Y2K) issue for more than three years. I established the Y2K Project in April 1996 to coordinate the State and local efforts and identified Y2K as the State’s “number one technology priority.”

You deserve the latest information about how Y2K may affect you and your family. As of September 1999, all of New York State’s “mission critical” systems and services that impact public health, safety and welfare are 100% compliant. State regulator and oversight agencies are closely monitoring key sectors including utilities, banking, healthcare and others to make sure they are taking the necessary steps to be ready for Y2K.

While the State is taking the necessary steps to be Y2K compliant, like all responsible organizations, we have also prepared contingency and emergency response plans.

This brochure outlines a number of simple, common sense steps you can take to be prepared for Y2K. Although service disruptions can happen at any time due to storms, equipment failures or other factors, Y2K provides an opportunity for the State and individuals to be better prepared for any potential event.

New York State is recognized as a national leader in addressing Y2K compliance and I look forward to moving into the 21st century together.

In the early days of computers, programmers used a 2-digit number for the year in order to conserve costly storage space. When the Year 2000 arrives, the date field will contain “00” for the year and, as a result, some computers may fail or produce incorrect results if not corrected.

What could be affected by Y2K?

Any system or equipment that relies on date-sensitive technology could be affected by Y2K. This may include computers, as well as equipment that contains embedded chips, such as elevators, phone and security systems, and monitoring devices.

Family Needs in an Emergency

In the case of an emergency, contact 911 or your local emergency response number. All NYS Police stations will also be open.