God wants you to buy a bigger television.

—The Book of Genesis

This is basically how the bible starts. Some may criticize me for paraphrasing and simplifying, but it’s 100% true; at least for the Abrahamic faiths, which include Judaism, Christianity and Islam.

Did you ever wonder why movies and television stations and high definition DVDs use a 16:9 aspect ratio? What? You’ve never heard of aspect ratios? Let me break it down for you!

Those black bars at the top and bottom of the screen you see on your wittle-bitty TV set? The ones you get from widescreen DVDs? Aren’t they annoying? That’s because you’re using them wrong. Those are the result of progress.

For decades, visual media was produced in a more square format, the exact shape of your pathetic little TV box. It had to change, because SCIENTISTS proved through their EXPERIMENTATION (on TV-watching animals) that the human field of vision is horizontally rectangular and that a more horizontally rectangular shape would be more pleasing to look at. Widescreen expands the total field of vision that you get from the olde-tyme standard definition. 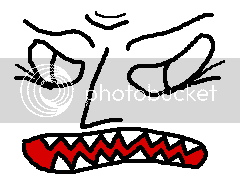 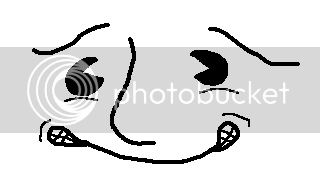 Which one appears more innocuous? If you believe the second one to be “safer” or “calmer,” you’re in good company. The second image is presented in a 16:9 aspect ratio. 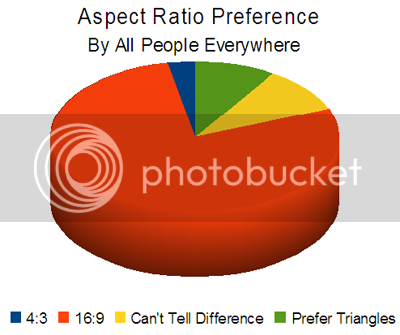 The quantifiable benefits of widescreen are therefore obvious to anyone with a rudimentary understanding of human vision. NOTE: this does not imply that the visually impaired are incapable of grasping the importance of widescreen ratios, but rather that the concepts may not pertain to them. It is unreasonable to expect that a person blind from birth would replace their current television based on the quality of an imperceptible metric.

What is NOT unreasonable is to expect people already stretched beyond their financial means to pony up the money for a sweet widesreen. Everyone who is capable of enjoying widescreen has a religious obligation to do so.

“Are you crazy?” you ask me incredulously, “All major religions were created thousands of years ago. How dare you make this blasphemous claim.”

Spoken like someone who knows squat about their own faith. I’m following a very basic syllogism:Ascetics may argue that we mere mortals have no right to aspire to the ergonomics of the divine; a pox on thee! What better way to honor God than watching His many creatures duke it out on Animal Planet in hi-def?

I say the man who sits on his couch all day eating chips and watching TV is holier than any priest. Blessed is the couch potato.

Thank you for taking the time to read my carefully thought-out post. The opinions expressed here are my own, and do not necessarily reflect the views of Roboshrub Inc. although they almost certainly do.