By Brad Beaumont of the Bottleton Bugle
America is at a crossroads: the highest political office in the nation is about to see the shattering of either the age or race barrier. While a smattering of factors can still swing this historic election, one man in particular has proven, time and again, to have the fantastic foresight to correctly predict (with the exception of Al Gore in 2000) the outcome of every presidential race for the last 28 years. And that man is pastor Lou Tintarello.

So who is Lou Tintarello? A jack of all trades, and a master of all. Tintarello is mostly known for his brilliant theological treatises and infrastructure/sewage case studies, as well as his own historic upset: enter the 1980 Tuscadillo challenge.

Jim Tuscadillo was a top dog on the national waste disposal circuit in the 1970s. He consulted hundreds of localities on reconciling their landfills with the Four Pillars of Landfill Ecology: topography, elevation, climate and access. President Carter tapped Tuscadillo in 1977 to head the fledgling National Board of Landfill Ecology, now a venerable institute of waste management.

Tuscadillo’s position seemed unassailable; his reputation was spotless and his folksy mannerisms made him a media darling. But then in 1980, four months before the presidential election, Tuscadillo announced his support of Jimmy Carter’s radical proposal to construct nearly a thousand new incinerators nationwide to reduce pollution. 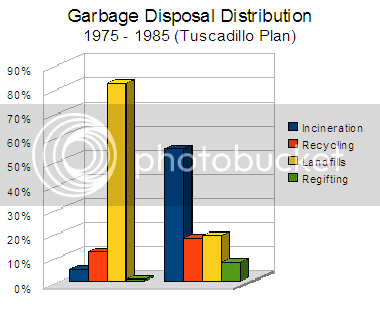 A supermajority of board members opposed this, citing the pressure this would place on current landfill ecosystems, and the potential brain-drain from an already diminished field. The long-term effects of garbage incineration were then an unknown, adding to the controversy.

It was in this political morass that Lou Tintarello burst onto the scene. Armed with a still-warm Harvard diploma in sanitation engineering and his experience as a boatswain aboard a transatlantic garbage barge, Lou Tintarello railed against Carter and Tuscadillo for “betraying the public trust” by courting the incineration lobby instead of relying on cheaper, more earth-friendly methods of disposal. By October, Tuscadillo had lost the support of the NBLE in its very first no-confidence vote, triggering an automatic chairmanship election.

On Monday the 6th of October 1980, the two titans squared off in the first of four debates. Stunning the audiences with his emotional two-hour rebuttals, the charismatic Tintarello rode to an easy victory. He even added a fifth pillar to the tenets of Landfill Ecology, volume. Former New York Times columnist Lon Skinnard even coined the term “the Lincoln of landfills” to describe the performance, a nickname which has stuck with Tintarello since.

Over the following two decades, Lou Tintarello built the National Board of Landfill Ecology into the most respected branch of the U.S. Department of Sanitation. In his 1990 book, The Trashcan Tabernacle, Tintarello described the curriculum and operation of academic facilities to educate future sanitation engineers. In a joint operation with the education department, the NBLE opened the first of eight janitorial academies in 1991. Today, all U.S. Sanitation Department employees are required to be academy-certified.

So how does Lou Tintarello factor into the Obama-McCain dustup?

According to some polls, Americans view trash disposal as a more critical issue than the Iraq War, health care, and the national deficit combined. 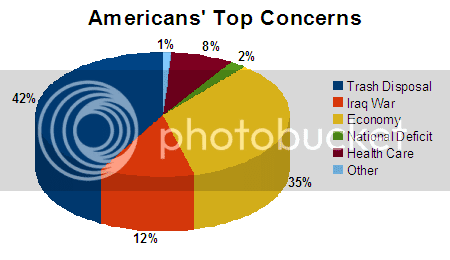 The endorsement of the “sanitation sage” could easily tilt a state like Pennsylvania, where landfill closures are beginning to affect traffic and property value.

In the last 6 years, President Bush’s hyped Help America Dump Act has closed over 40 under-performing garbage dumps in the keystone state, forcing small towns to levy higher property taxes to hire private disposal services. “We all believed America’s sanitation situation was in need of reform,” says NBLE member Tom Jenkins, “but they went about it the wrong way. [The Dump Act] really did not address the underlying industry complaints, such as the nationwide junkyard dog shortage. It slashed the training budget for that.”

“It’s sad that Congress squandered an opportunity to revive our means of disposal,” says newly-elected member Rob Richardson. “Compared to the Europeans’ Large Hadron Trash Compactor, we might as well be scooping rags with pitchforks. There’s a global competition going on, and we’re completely unprepared.”

Although the NBLE’s charter expressly forbids it from making partisan endorsements, many employees in the heavily Democratic, mostly autonomous agency have endorsed Barack Obama’s plan to provide wetland protections to landfills over 70 years old, allowing the taxed lands to lay fallow while their ecosystems recover. 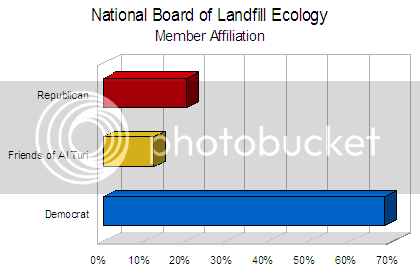 Orthodox members of the Friends of Al Turi (a watchdog organization/political action group), citing the closing of the Al Turi landfill, say that this plan is foolhardy and would only cause a garbage crisis. As its (the Friends of Al Turi’s) former spokesman, Tintarello is in the unique position of diffusing this schism within the NBLE. But has he decided?

“I don’t presume to speak for Lou. He’s vetting both sides. If he decides to endorse, you can believe it’ll come straight from his heart,” NBLE chairperson Jeanine Palambro told the Associated Press last week.

“Sarah Palin didn’t do her ticket any favors with her claim that Jesus was the world’s first garbage man,” Palambro added when pressed for specifics.