We've Got What You're Looking For

Over the last few years, many people have stumbled onto this site looking for... something. While this list is not exhaustive, I believe it to be a fair representation of what this blog offers:

Also, we’re Google’s #1 hit for the terms “sociological experiments” and “dennis hastert cannibal”. Thank you for making us number one, you Kafkan mutants.

In a similar vein, our browser statistics are:

I’m surprised Opera didn’t make the list at all, considering my widgets.

The morning bell sounded over fields of gloomy extrusions under a desaturated neutral sky. A flock of birds had crowded around the only body of water, a polluted manhole-sized grotto, perked up and flew away haphazardly. 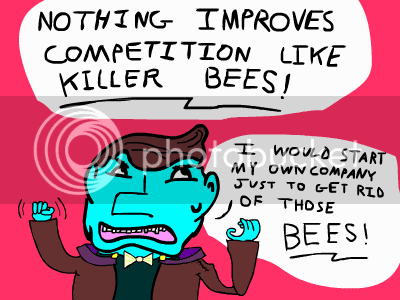 At the third chime I took a look into the grubby pool; the bottom was murky but navigable, perhaps later I would set a paper boat adrift and record the results after twenty such trials. One day, yes. But today was special. Today was the day I was called up... by destiny. Here’s how the call went:

“Hello, this is Destiny. Is this-”

“This is the Outhouse Collapse Outreach Center. How may I direct your call?”

“Are you aware that 7% of all thunderboxes collapse within the first three months of construction?”

“Are you a Star Trek fan? Brent Spiner, who portrayed Commander Data in the Star Trek television series was grievously wounded in a massive port-o-john collapse in 2006.”

“I’m pretty sure I have the wrong number.”

“Sir, are you denigrating our foundation?”

“OCOC has renovated thousands of ageing public outhouses worldwide. Have you even used an outhouse?”

The conversation went on like that until Destiny faked going through a tunnel and hung up, leaving me alone and wishing I’d gone with my judge persona. The threat of a county judge popping an ollie on your lawn in his grandson’s monster truck always keeps them on the line.

But I assume that what Destiny was trying to tell me was that it’s been far too long since I updated what was once my greatest creation, Project Velt.

For about a month now, I’ve been in monastic seclusion. Now what could I do with all that time? It came down to two choices: either go down to the river and spend all day punching fish or rebuild Project Velt into what I always hoped it could be. Both were good, but what good is punching fish going to do for my resumé? It’s not like I’m applying for a job on the Pequod. I wanted to create something that everyone could enjoy (not excluding protosapiens), and after about two weeks of constant coding I had just that.

Then I changed the product requirements and spent another three weeks upping the ante, building the pie higher until I arrived at Project Velt 2.0 (now 2.2). (Also as a gratuitously useful Opera Widget!) Project Velt 2.0 is fully compatible with Opera 9+ and Firefox 3+.

Don’t have any idea what I’m talking about? You’re probably that punk kid that’s been tramplin’ on my lawn. Read this walkthrough, ya hooligan!

Fanfare is appreciated but unnecessary. If you wish to thank me, do so in writing on the wall of any outhouse you use. OCOC thoroughly documents its projects.