“Get ready to jump for it.”

I braced my knees and steadied m’back. It was an old tradition, but one I looked forward to whenever I was at one of these things. 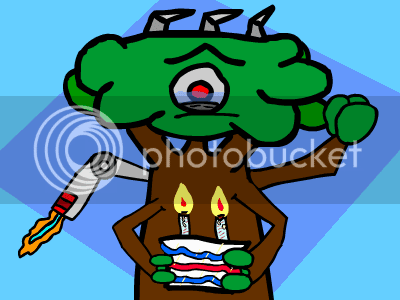 Now begins the terrible twos!
With my fists, yes my fists, with those fists of mine, I punched away at the closest party-goers.

“That cake is mine!” I bellowed at the top of my lungs. Brushing past a 13th century Japanese feudal warlord, I grappled with a 13-year-old sentient meatloaf before finally reverse-somersaulting and accidentally karate-kicking the cake into 13 identical slices. I’m feeling lucky!

“I know who’s having the next birthday!” someone in the crowd called. I ignored the voice and rubbed cake in my eyes, just like my ancestors did in the olden days.

Honestly, I couldn’t have pictured a better birthday party. In two full years, Roboshrub Inc. has done so much to ensure the future of humanity: we’ve aired the grievances of Oxglove County, put a prairie dog on the moon, wiped the long-horses from history, fixed that crack in the Liberty Bell, ended a minor war between Morocco and Guam, and merged Canada, Mexico, and the United States with Viking Disco as the national anthem.

And we did it all for less than minimum wage.

“I just wanted you to know,” Evil King Robo-Bob Dole told me during the fireworks display, “I had a great time.”

That threw me off a little. “Huh?! I thought I condemned you to eternal compression in the Burning Sub-Blogosphere or something to that effect.”

“Not in front of the kids,” the King said, pointing to three little toddlers crowding around his base.

“No. After you started ignoring me, I joined OneStar’s genocidal rampage against Canada. But once I laid eyes on that frozen tundra, I knew I’d finally found paradise. So I started a family there and became a forest ranger.” 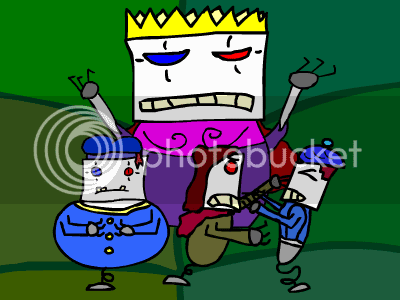 The fat one’s too fat to fight.
“And what became of OneStar? Did he manage to completely conquer northern New Vikingland?”

Bob Dole took a deep breath by pulling air in through his nose, struggling to remember. “No, the Canadians took a page from the Russians’ book and retreated north. Once winter came, OneStar’s troops were ill-equipped and had to go south. But the Wisconsin Militia was waiting for them...”

“Why Captain Metabeard! I haven’t seen you in months!”

Completely ignoring Bob Dole yet again, I waddled over to the venerable psychic pirate. Although he’s worked here for some 80 years, I still know very little about the enigmatic man. Some say his mama was from the future and his papa was also from the future, and a pirate.

This was new. “Are you Amish? I wouldn’t have asked, but the only time I’d ever heard anyone call someone ‘English,’ they were Amish. Or actors portraying Amish people. Or fans of ‘the football.’”

I was truly impressed that he’d risk creating a temporal paradox by revealing information about future events. “What else did you see when you were in the future? Was it stocks? Did you see some good stocks?”

“Put all your money in gnome-guards/apple harnesses.”

“Scusarme per un momento,” I grabbed a chubby kid and sat him in front of the pirate. “But I have to go chase some squirrels. Talk to this fat kid.”
***
I could still hear the Viking rock and roll, but out on the balcony it was muffled to the point of extinction. It felt good to breathe in the salty mountain air.

Here’s to another year, I thought, dropping a penny over the railing. 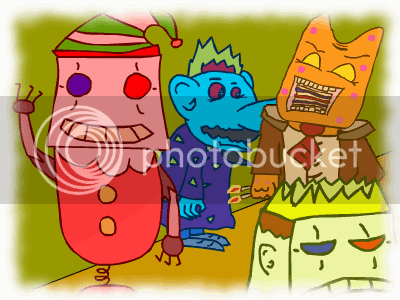 First off, I’d like to congratulate you on your 50th anniversary. Most married couples these days break up after a couple of hours, but you’ve kept up appearances for over twice my lifetime. Kudos on that. However, I did have a small problem with the anniversary party you held last week. While I applaud the pirate theme, and the fact that many of your elderly friends are still alive, you thoughtlessly blasted my house with 30s-style big band music until about 3:00 A.M. when I called the police. All my goldfish died, and I’m considering pressing charges.

Secondly, I’ve got an issue with that... let’s say that oversized rat you lovingly call a “dog.” That mongrel has been digging up my lawn for the last three years now. I’ve told you repeatedly to curb that thing, but every night at exactly 6:23 P.M. I see the same sight: your dog. By my lilac bushes. Eating the lilacs.

I’ll have you know that those lilacs cost me over a thousand dollars a bush, as I had them imported from Naples. My lawyer has already sent you a full estimate of the cost of damaged shrubbery, and I expect full recompense within five minutes of sending this letter. Your dog also defaced the sidewalk in front of my house, but that’s a municipal issue and I’ve already written to the city councilors and the highway commission. But I would still like a formal letter of apology.

Also, did you know you can add a customized search engine to your blog?

I tell you this only because you expressed interest in open-source search technology at last month’s Salt of the Month Club meeting (by the way, iodized salts take fluorinated salts hands down). Apparently, it’s stunningly simple to create an Internet Explorer 7/Firefox compatible search engine:All you have to do is save all that (replacing the parts in parentheses of course!) in an XML file and upload it somewhere. Ooooh! For the image URL, you can use a data URL. Internet Explorer doesn't use them, but it will. One day, when the sun has burned out, it will. Include the following tag in your site to make your search engine discoverable:

I want you to think about all that. Think and reflect.