For the last few days, I’ve been playing around with the canvas element, teaching myself how to draw primitive shapes on the fly. As a result of this gut-wrenchingly worthwhile endeavor, I now have a pretty swell little demo up and running. 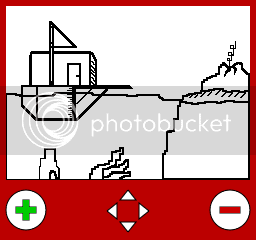 I’ll admit that it’s not a finished product; features I can’t think of are unimplemented; the resolution is that of an 8-bit gaming console; physically shaking your computer does nothing to remove the image. And, like the buttons and levers at every nuclear plant built since 1957, the controls are painted on.

Still, there are many keyboard commands that allow gameplay to be not only enjoyable, but super-enjoyable.

Have at it! Even on the Wii — that’s right, I’ve got it working with the Wii remote’s d-pad. Don’t forget to tell me exactly what you think of it, because I base all my design decisions on misinterpretations of user feedback.