Four years ago, a horrible rip was found in time. I know because I was there — cowering like a simpering child.

My name is Karl Überdale. I’m a sorcerer.

Whatever you’ve heard, I’m not a crackpot; nor am I a smuggler, though I WAS during sand prohibition. How can I defend myself? I was young. Sand was everywhere. I ran with the wrong crowd.

Don’t get me sidetracked… I was talking about time. Four years ago… yes. I remember.

It was right after the Roboshrub Inc. groundbreaking. I was with the Big Boss on the skeet-shooting range. The targets: propane tanks. I guess when you’re a corporate hotshot you can afford to singe your eyebrows a little.

We were talking about that new hire down in accounting: Bob. Merlin’s beard, I’ll admit it — we were cooking the books. Everyone got a taste, but I was the master chef. This PhD in Voodoo Economics isn’t honorary, you know. 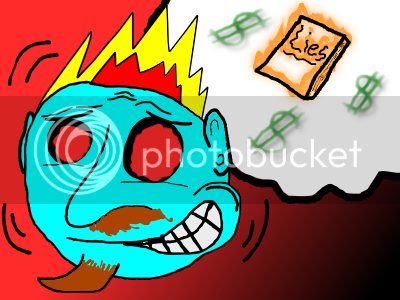 I wish I’d never found it. But I did: a dark spot. Not like a carpet stain, or those black holes in space, this was a spot where things just didn’t exist.

They’re transient by nature. The binding spell I used was way out of its league, but it held for as long as I needed it to. I set up a tent around this crack in reality, the unseen spot smack dab in the entranceway.

It was a Monday.

She was the last employee in the office — as I knew she would be, gathering evidence for those shysters at Channel 6. Their exposé would have crippled the fall fashion line — glass leotards — but they needed the internal memos stored on Bob’s laptop.

Verily, that laptop was key to my disposal of the troublemaker. As she was about to post yet another incriminating blog entry, I galloped past on my seven — no, my ten foot tall rabbit, and swiped it.

She blinked and grabbed the rabbit’s tail, climbed its furry back, and fistfought me for the machine. “Why, Karl?” she asked. Then she crowbarred my face.

Little did she know I was taking punches voluntarily as the rabbit (whom I’d named Cotton Brambles) was heading for the timecrack. With one final blow to the head, I let her take the laptop from me; I vanished in a tornado of smoke and sublimated antifreeze.

Cotton stopped in a controlled rollover. Before Bob could say “Susquehanna,” she’d fallen headfirst into the anomaly. My spell broken, the spot moved on to terrorize the Andromeda galaxy.

Not even Cotton’s nautical jig could assuage my guilt. And that rabbit plays a mean accordion.

My promotion was bittersweet. On the one hand, I’d betrayed the one person in this company with a soul — but on the other hand, 24-hour-a-day popcorn chicken!

And that was that.

Only it wasn’t. 364 days later, I was in my office (obtained through poisoning) when a perplexing post appeared in my feed reader — a post from Bob’s blog! Ahhhh! Ahhhh! Nooooo! Ahhhh!

At first I thought, “what utter rubbish,” and deleted the post. But, 364 days after that, yet another post appeared! Where were they coming from? Six months of research into dark spot formation and attitudes led nowhere.

Some say that every year, Bob’s hatred of Mondays is strong enough to break the barriers of time and space. Others say aliens inhabit the dark spots, and are using Bob’s laptop to communicate with us. Still others blame server errors, haunted WiFi, hallucinations and there persists, naturally, the “Second Bob” theory.

Some look for patterns, others pray. A shrine exists for that purpose. Yesterday I found a young monk who said that all the posts were published simultaneous in the future, and are being retroposted for us.

I can’t disprove any of it.

But I — we — can learn. Sometime today, another post is due to come from the ether. Study it, puzzle it, tell it your secrets.

The Bob is out there.