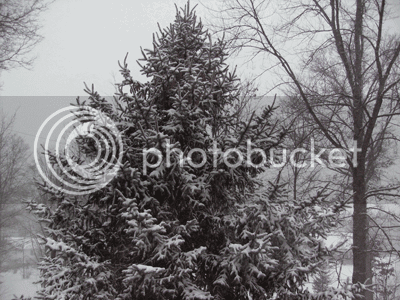 ’Twas snowing that night, as I sat on my porch.
One could see not the stars, as clouds clogged the sky —
Though the stars were alight, I could see to the north —
Down by the horizon, those suns harried forth —
But the surly, burly clouds would not be denied.

“Faster, thicker, colder, quicker,” the happy snowclouds sang.
As if by ritual, my trees reached to cloak their bark —
“Light or heavy, we shall levy,” thus the great oaks rang.
“We shall hold, for we are sturdy,” they sang through every twang —
Leaving overburdened branches dying in the dark.

The Armies of Winter descended to face me on their feet:
A million frozen soldiers armed with tiny icy shards.
I fought them back with just my tongue, they yielded to the heat —
They fast refused to shake my hand, melting at my greet —
Clearly, I painfully admit, détente’s not in the cards.

So I sit there, unperturbed, watching the dancing clouds.
The cold is just part of their wintry melody —
So I sit there listening; they’ve never been so proud —
“An audience!” they sing, and play their music loud.
So I sit there beside the clouds and the trees.
So I sit there and join the chorus.

I have to warn all you guys about an awful device that has cropped up more and more frequently in my life over recent years.

It's those fuzzy toilet lid covers.

Toilets are delicately balanced so that both the lid and the seat may both be flipped to an upright position. The reason is so that I don't pee all over the toilet seat.

HOWEVER, many people, for whatever reason, find these fuzzy covers and think to themselves, "This'll make my toilet less ugly" or "This'll add some color to my room" or "My toilet lid is so cold I can't lay back against it when I sit down" or maybe "I really wish my bathroom were better at stench retainment, if only there was fur all over the toilet" or something.

I don't claim to understand why you want a fuzzy cover on your toilet lid. I don't! But before you go and splurge on one, let me tell you about the gaping design flaw inherent in the fuzzy lid product:

When toilet engineers carefully plan out the scale, dimensions, aesthetic and design of a toilet, they do NOT account for the alteration of their design.

So when you slip a cover over the toilet lid, you are altering the angle at which it sits when upright. By twice the thickness of the cover, since it wraps around.

Women will not notice an immediate difference. But the first time a male goes to pee at that toilet, the SEAT will have lost the critical extra three degrees or so it needs to remain balanced in the upright position.

The seat will fall down, the guy will lift it again, it will fall again, he will get frustrated and pee anyway. Now he is super stressed out because he has to be extra careful with his aim. He will explode at work, or have a breakdown in class, and soon will be unemployed or expelled. In this economy, there will be no jobs available, and he will become a hobo, laughing maniacally as he urinates on whatever he wants.

The seat will take its sweet time, tottering on the edge of falling down again. The guy will start peeing. Then the seat will fall, THROUGH the stream of his pee! Even if it misses the arc, it will clatter loudly as it hits to toilet, startling him. He will jump like a nuerotic squirrel, getting pee EVERYWHERE. Out of shame, he will flee the building into the wilderness. He will make friends with wolves. He will follow them south when winter comes. There he will meet a beautiful amazon in a lost valley beyond a waterfall where dinosaurs still roam the Earth. They will fall in love and be married under the gentle blaze of the third sun. Then she will buy a fuzzy toilet seat cover, and he will be reduced to a jittering wreck, sleeping with one eye open, dreading the day that the toilet seat will clatter down and rob him, again, of all that he loves.