I’ve spent the entire day working up the courage to tell you that you’re in immediate danger. Your secrets — what you thought you were hiding from the rest of the world — are in danger of discovery, thanks to lingual cryptanalysis!

Those of you who have been coming to Roboshrub Inc. for advice, absolution, or aggravation will recall my oft-mentioned encryption program, €ncryptør. You’ve used it over the years to leave strings of seemingly random characters on other people’s blogs, and as a proponent of obfuscation, that pleases me.

Three months ago to the day I released €ncryptør as an Opera widget. It’s been downloaded about 2300 times so far, which means there’s at least one person out there using it daily and singing praises to the genius and elegant simplicity of Kyle.

Kyle is the style of €ncryptør’s faux-file data pile. Whenever you load, save, or delete “files” in €ncryptør, that’s Kyle you’re dealing with. I named the Kyle framework after Kyle al Zabar (sometimes spelled “Sabar”), a refugee from the fictional nation of Microstan. He was vaporized in an impact with a high-velocity egg earlier this year.

But a revamped graphical file system was the only improvement I made when I widgetized €ncryptør. Did I look for ways to make the encryption code more secure? No. Did I... well, that about covers it. €ncryptør was basically a child’s toy, a primitive substitution cipher and a fancy GUI. That may have been good enough for the Caesars of Old, but we live in an industrialized global super-nation with crafty Hinterland Barbarians waiting to jump us at every turn. 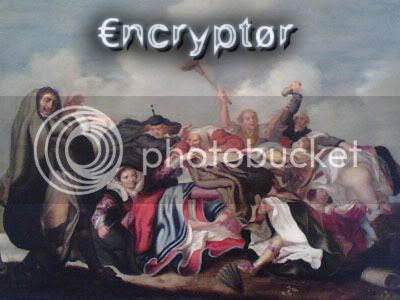 Now you too can hold the line against eternal darkness with:

The new incarnation of this non-award-winning program introduces columnar transposition, which means someone won’t be able to decipher what you wrote very easily without the key you used. In fact, a combination of substitution ciphers (which €ncryptør already had) and transposition ciphers (which is has now) are the building blocks of the Data Encryption Standard. I don’t know what the implications of that are, but they sound pretty heavy.

Anyway, I’m leaving the old version up so that you can take a trip down memory lane whenever you feel like it; also, deleting it would probably break some bookmarks, and I’m against dead links. If you want to read some of your old messages, just turn off the transposition cipher. If you would like to know more about the fantastic life of Kyle al Zabar, look deep within your heart.

*UPDATE*
I just added a Polybius Square with a customizable alphabet and fixed some bugs. If you already downloaded the widget, you might want to do it again. Polybius is pretty awesome, even if it does double the size of your messages.

*UPDATE 2*
Another minor update. Ignore the man behind the curtain.

The Passion of the Roboshrub V

Vincent O’Neil gripped the pleather armrest as tightly as he could. Normally the 350 pound 8th grader would have been in school, but a nerve-wracking toothache convinced his parents to send a bag of grain in his stead; surely the offering would placate his instructors while Dr. Saul Graccio repaired his enamel.

“I know I told you to say ‘ah,’ but... you know, here.” The elderly dentist handed Vince a pack of sugar-free Mentos. “It’s for your own health.”

Vince pawed at the package. “What is it?”

He scratched his beard for a few seconds. “It’s candy, Vince. Eat as much as you want. But let’s take a look at those chompers of yours first.” Pulling out a flashlight, Graccio waited for Vince to open his mouth, which creaked like a rusty drawbridge. You’d think a kid this fat would be able to unhinge his jaw at the drop of a hat, the doctor smiled to himself. If his chuckle was audible, he’d brush it off as a side effect of the laughing gas.

“You speak English?” Graccio asked, only vaguely conscious of the outside world. Once he got into someone’s mouth, you really couldn’t talk to him until he finished poring over each bicuspid. “Okay, what have we got here? Oh, that ain’t right. You brush your teeth often?” 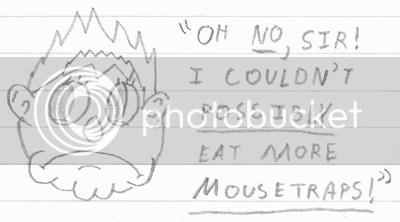 Vince shook his head, or at least tried to.

“Yeah, and I’ll bet you’ve been drinking a lot of soft drinks. Your teeth are totally, almost dissolved. It’s like you’ve been chugging battery acid. Seriously, what’s wrong with you? Don’t you like your teeth?”

“You know, I get patients in here every day who lose teeth in fights, in accidents, and sometimes the teeth just fall out on their own. But if you’re going to melt your teeth and lie to me, I’m not going to treat you.”

The doctor pulled his hands out of Vince’s mouth and reached for a bottle of orange solvent. “You see this?” He unscrewed it and held it upside down over the nearby sink. “That was tooth lotion. If I’d applied it, your teeth would’ve regenerated instantly. But you had to be a liar and bring shame onto my humble medical practice, so now your teeth are going to stay the way they are.”

“But I haven’t been drinking any soft-”

“Look, I’m going to sue you if you don’t get out of this office immediately.” Graccio snapped a rubber glove onto his left hand and moved Vince’s tongue out of the way so he could get a bird’s eye view of the bottom incisors.

“Just ignore him,” a skinny kid in a baseball cap and a pirate hat whispered from an adjacent pod. “He won’t remember any of what he’s saying, once he’s done. He’s in the zone.”

“Yeah, I’m going to have to replace your entire mouth with a combustion engine, like what they have in cars.” 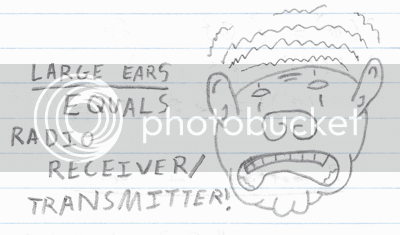 Vince panicked. Having a combustion engine for a mouth would be fun at first- watching the potato chips he shoved into his face burst into flames, spewing exhaust into his mothers face when she kissed him goodnight. But after a few days, it would grow to be too much. All the kids at school would call him “motor mouth,” “stupid” and “Jimmy the Guy Who Makes Car Noises.”

Bucking with all of his weight against the straps in the dentist’s chair, Vince’s flabby wrists burst from their restraints. Thusly unfettered, he bolted sluggishly out the door and down the hall.

“Hey! Hey, you!” the dentist shouted after him, “Bring me back some baseball cards from the Seven Eleven!”

***
Vince pushed back against the side of his faux office chair. The pain in his teeth were unbearable, but he’d told his parents nothing of Dr. Graccio’s plans to vulcanize his mouth; they wouldn’t believe him, not after he’d accidentally eaten aluminum foil and triggered a homeland security alert when he’d walked through an airport metal detector. 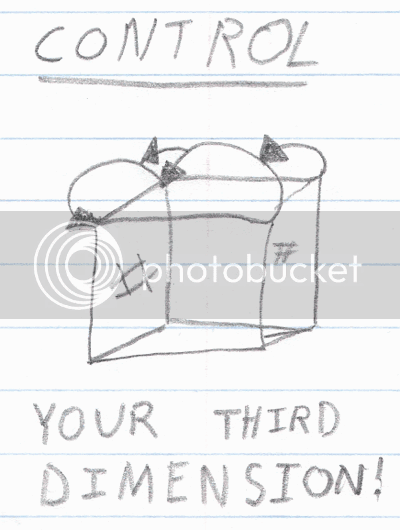 “You’re the only one I can talk to,” he whispered to himself in the mirror. It was a habit he had, standing in front of the mirror and talking to his reflection. Having no friends did that to a person. “I think we should see other people.”

Dragging his be-slippered feet, the obese teenager (yes, 13 counts as teenagerhood) slumped down in front of his Dell Optiplex GX1. Double-clicking the big blue “E,” Vince skillfully navigated to his favorite search portal — Lycos — and tried to find a new dentist using the keywords “discreet,” “free,” and “tooth docotr” (bless his pudgy heart, he forgot the word “dentist,” or even how to spell “doctor!”).

“Your teeth will pave the way for my armies.”

Vince choked, spilling his cherry slushie and a box of pretzels over the keyboard, where they joined with hair, dandruff, and countless crumbs from a thousand snacks. Why did I even think I could eat pretzels with such a painful toothache?!

The voice was coming from the heating ducts. The haunted heating ducts. Vincent panicked. Who — or what — could be in his heating ducts? They were only about eleven inches wide, and the only point of access would have been through the boiler in the basement.

“Give me those choppers, you sluggish hotdog!” 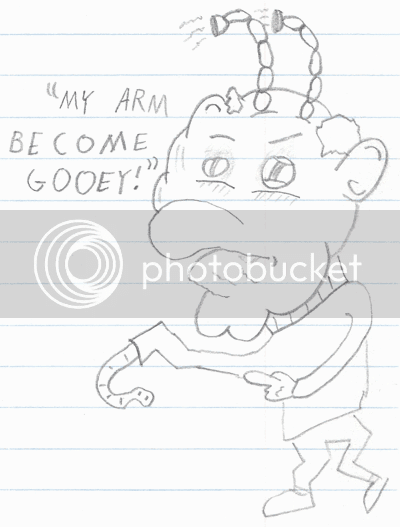 Before Vincent could convince himself that this was just a horrible nightmare, his monitor degaussed. Before him was a familiar face, but not one that gave him any measure of comfort, no sir! There was an audible click as the downstairs furnace came on and bathed the whole house in tinderbox splendor. Vincent stared into the digitized eye cogs of his virtual overlord, the long forgotten... Destructobob.

“This pain you feel is like an open freeway of psychology!”

“Wh-what do you want from me?!” Vincent quivered, rubbing his legs as memory of Destructobob’s last encounter broke through his mental barriers. She’d used him to achieve an ambiguous goal in a recursive timeloop- the worst kind of timeloop, excepting the infinite timeloop. The last thing he needed now was another federal entourage chucking ninjas through his treehouse...

“Have you not been keeping up with today’s street lingo?” the possessed monitor asked him. “Your teeth are not your own. For forty frothy days and forty frosty nights, you were groomed by the molar men to be their mascot! Now rest lightly... for the undermasters of the gums may one day require your head on a stick!”

Destructobob immediately vanished from the taskbar as if her program had terminated. Five seconds later lightning rays shot out the USB port, peppering the wall with burn-marks but leaving Vince unscathed; his thick hide acted ably as a buffer. Standing perfectly still at his room’s magnetic north pole, Vince waited one minute... 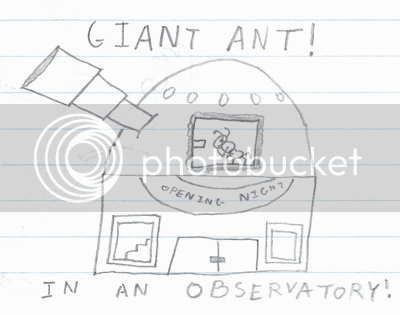 Finally, he breathed a heavy sigh of relief. It’s... passed.

And then the floor collapsed.