The original UP (Uno Pregunta) I.Q. test was created by Professor Jöhan Düking in 1956, but was soon rendered obsolete by the launch of Sputnik. Düking spent years tweaking the test to accommodate new astronomical phenomena, and the revised version was administered to a pack of wild Tasmanian kangaroos in 1974: 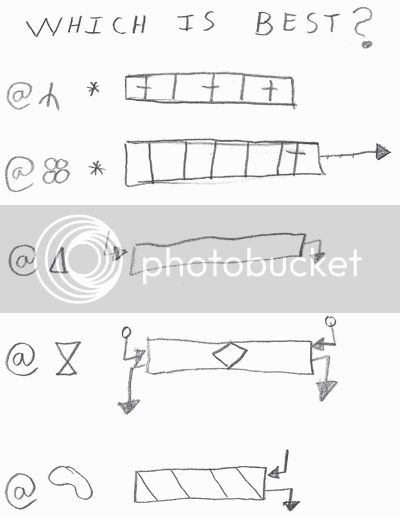 They all passed without exception, much to the chagrin of DP (Dos Preguntas) test champions. UP2 was formally adopted as a psychoanalytical standard the following year, and in 1987 the test was used to validate the sentience of IBM’s Deep Pockets computer system. Ten years later, UP2 became the primary method of vetting presidential candidates among political pundits.

If you yourself have trouble deriving the correct answer, perhaps you should try upgrading your consciousness with Roboshrub Incorporated’s brand new line of Opera Widgets (indefinite limit per customer).

Letters from Hoth 2: Return of the Prince's Hired Help 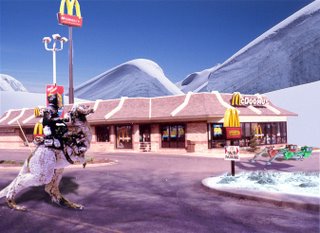 Dear friends, my journey continues to be both dangerous and mysterious.
Yesterday I went through secret underground tunnels that connect the halls. There are deep cravings in the walls, I can't make out exactly what they mean. With the help of Miss Contact (she got to chose her codename) I've been decoding them. There's some sort of burial rites and... something else, something after. I feel a breakthrough is close but not yet.
Days ago I glimpsed something outside my room. I've taken to staying, locked, in my room. I now know it is no longer safe to stroll outside. Students have taken to prowling outside, hair bursting out of flannel jackets. I'm not sure what they're looking for. Prey? Occasionally they fight over territory. Some are so bestial you can't tell that they'd been human before. Inside the Halls you can see students begin the transformation. They start to wear flannel jackets and grew beards "For the cold".

Except for a direct run to Miss Contact's car-sled I stay inside my room, locked off from the rest of the world, surviving on care package food. I spied something odd through my binoculars hours ago however. Men. Teams of them in all white parkas. I wouldn't have spied them through the gales of snow except for their dark, dark glasses. For the past two hours they've been piling excavation equipment into a maintenance shed. I might have even excused their presence as workers finally doing their jobs. However there are two things that made me question the men's actions. The first is the seer number of white clad workers piling into the small, small shack and not coming out. Secondly, the guns. Every fifth worker had an automatic weapon in hand.

Granted campus is dangerous, with the crazed students pushing down trees and mauling people but... not for a small army. I've contacted Ms. Contact and we've agreed to investigate as soon as possible.
This might be my last letter. Let my family know I went down in a blaze of glory, searching for the truth.
Give my TV to Peachy,
Mr. R9NE 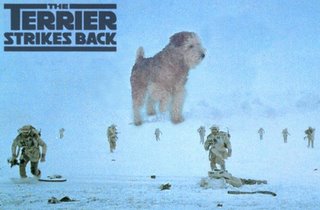 To my dear comrades in the daylight lands,
How long has it been? Months? Weeks? I can no longer remember. The landscape visible from my quarter’s window is blurred and buried from snow. At times the sill is filled, walled in with icy whiteness. If it weren't for the Roboshrub my sense would have left me long ago. From this long line, I can remember how the sun shines, how grass grows, the freshness of the evergreens. Ah home...
I wish you all better than I,
Mr. R9NE

To my devote fans,
Welcome to my mind. This outlet is the way I have of maintaining proper, human communication. Cabin fever has reduced communication with my fellow residents to grunts and unintelligible babbling. Campus has been shut down to "keep students safe". While this is a cause for celebration in my fellow, primitive students I suspect this is the cover for something much more devilish. I've been avoiding cabin fever by long walks around campus, reconnaissance and meeting with a contact off campus. This is accomplished by putting on two pairs of under garments, long johns, double laired pants and three shirts as well as a coat, hat and gloves. She, my contact, prefers not to be mentioned by name, even in my most private of journals, but suffice it to say she has helped a great deal.
The pieces are coming together.
-Mr. R9NE

The Fascinating World of Clams

Hello again, my wonderful readers! It's time for another short lecture from yours truly. Today, we'll be covering a simply perplexing resident of the aquatic animal world, the clam. 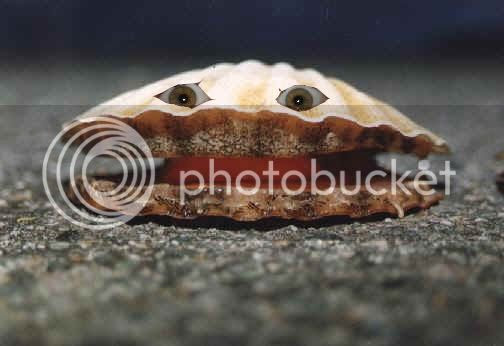 Fig. 1: My younger cousin billy.
An Introduction to Clams:

"Clam," or "muscle," refers to a series of families of bivalve moluscs found in both fresh and salt water, but most commonly in intertidal areas. Though similar in appearance, the clams found in lakes, creeks and rivers differ radically from those found in salt water.

For one thing, the method of locomotion/locofixture varies with the climate. Both types of mussel have a "foot," a muscular appendage often likened to a human tongue, but with twice as many taste buds (and half the fat). Freshwater clams use their larger tongues to burrow through mud, silt, red tape, and sand in order to conceal themselves. On the other hand, the saltwater clam has a smaller foot and affixes itself to its environs with a viscous secretion that hardens when put in a microwave for longer than fifty seconds. This substance, though difficult to obtain, is a fat-free alternative to ketchup.

The mussels' arch-nemesis and primary predator is the walrus, known for its confusing diversionary tactics and love of bluegrass.

All mussels are "filter feeders," meaning that they extract tiny organisms from the water and immediately begin to digest them. Until recently, scientists assumed that they drew the water into their incurrent siphons, past the gills and into the mouth. Today, however, marine biologists have discovered that they merely wanted us to think that while phytoplankton, zooplankton, guppies and (in the case of the giant clam) small children were quietly abducted from aquariums across the continental United States and parts of Europe and processed into a fine paste. It is important to note that the clam's shell is composed of calcitrates that they divorce from the seawater solution.

All mussels are gonoristic, meaning that every member of the species is either male or female, and have socialist tendencies. Male clams tend to be more aggressive, whereas the females can become extremely territorial only when their offspring is involved. You will never encounter a clam at a nightclub, as clams never enjoy the pleasure of intercourse: they eject their biological material into the open currents, in the hope of breeding a hybrid subspecies immune to nuclear fallout. Freshwater clam mothers draw sperm into their shells, where the egg is stored, whereas the saltwater female likewise releases her eggs into the environment. This is why your mother warned you not to drink the water when she took you swimming. A clam's life expectancy is between ten and one hundred million years.

Clams On The Moon:

When Austronaut John Curtin became the first man to set foot on the moon on December 6, 1941 (known then as "Moonania"), he mistook the deep craters as clambeds, carved gradually over the course of millions of years by native clam life. His wild, unsubstantiated claims led directly to World War II, with both the Allies and Axis powers competing to establish first contact with the "underground Lunar clams" Curtin ranted about repeatedly on his blog. When no such clam colonies materialized by 1951, President Truman used atomic persuasion to force Australia into the ANZUS Treaty, which effectively ended Australia's space program. Extraterrestrial clams were also rumored to exist, and some conspiracy theorists say a bivalve spaceship crash-landed in Roswell, New Mexico, in 1949. The "Roswell Clam" has since become a prolific cultural icon.

This portion of the lecture will be cut, due to time constraints. The information is in your textbooks, and will be required for your final exam.

Remember to tell your friends that if they missed today's lecture, their names have already been submitted to the aviary.

PS: Keep an eye out for these friendly molluscs in any of the following places!

There are no clams in Mexico or Canada. Sorry, Fakiegrind!
--==\
/==--
Professor Huxley

How Do I Look To You?

Following up on an article I recently read regarding the rendering of images, I decided to paste together a montage of what our avatars look like under the different browsers we all use to bend the Internets to our will. Given the results of the article and my previous firsthand experience with all these browsers, I expected Internet Explorer to mangle our avatars, and Opera to benefit from its bicubic bedrock beyond all bound. Behold, the lenses of four different engines!

From left to right, the browser used was:

NOTE: I didn’t include a link to Firefox 3 because it won’t be released until November. The version I tested with is an early developer release, and is so unstable that its codename is “Minefield.” But the new graphics engine has already been implemented, so it’s a fair test.

I also didn’t test the way everyone’s avatars would look under “new Blogger” blogs, or how they would look if they were enlarged (though I hear Firefox is great at making images larger, with some kind of mystical bilinear filter from the future).

Here’s a perfect example of the depravity I’ve been talking about. Anyone looking at Jon’s avatar in Internet Explorer or the current Firefox would assume he was some kind of gelatinous blob, instead of the macho warrior the dainty Opera browser depicts.

Like Jon, you can barely make out Flatlander’s stylized face amid the pixelation in browsers one and two. Where’s the zip? The pizazz? He even looks kind of angry to be in those browsers, wouldn’t you say?

Magnifique! The lovely Ms. Jin, like her baked goods, is a masterpiece in all browsers. I can see a distinct crispness in the Opera partition (which will make her smile as she reads this), though the quality of image scaling for photos seems to be equal across all browsers.

The Professor looks a little off in Internet Explorer 7 and Firefox 2. A little... scrunched. Some browsers’ scaling algorithms must be more equal than others.

Is it just me, or does Firefox 2 Koma seem a little surprised?

Firefox 3 seems uniquely suited to handling cartoons, with ease and integrity. For shame, Opera, for shame.

You can clearly see, if you look hard enough, the jagged edges on Tak’s helmet in Internet Explorer 7 and Firefox 2. And the words at the bottom of his avatar look a little less blurred in Firefox 3 and Opera, which is consistent with the article’s testing of tiny, typed text’s tidiness.

The Alpha and the Omega: all the yellow buttons are different cross-browser, the mouth looks better in Firefox 3 and Opera 9, and the fingers were poorly drawn to begin with. Yet, the orange bulb on the tip of the hat looks much less jagged in Firefox 3. I can’t explain that, other than to say that the Mozilla corporation is starting to design their graphics engines to accommodate me, personally.